Years back, when I was an enthusiastic, amateur gold prospector, I had undertaken several trips to outback N.S.W. to a small town and its’ surrounding gold-field.

A group of fellow prospectors were organising a trip up there during the forthcoming Easter break. One friend suggested that he and I should go up a week earlier to check out some likely prospects before the others arrived.

I went! Liked it so much that I stayed for five years!

So in part to supplement my income, I agreed to help a local builder with a project he had reluctantly taken on, an extension of sorts creating a new bathroom/laundry for a local named Les. This place had started life as an old caravan, to which several rooms had been added. (No council / no building regulations! Builders bliss). The builder soon agreed that I was capable of building the required frame work. He was happy for me to do the job as he wasn’t keen on working himself. So I moved from my camp some forty Ks. away and stayed in one of Les’ spare rooms.

This was when I met “MOSS”. Moss was Les’ dog. He was a Staffy , Ridgeback cross. Les claimed to have papers showing Moss’ pedigree. His real name was Amos and other names to follow, which I never remembered. Moss was a beautiful, friendly natured dog with many human traits in his makeup.

Les was, to say the least a highly intelligent, eccentric. A retired Biology teacher. Les had never married and Mossy was his world. He loved that dog so much. It became a standard joke with the locals to see early, every morning , Les and Moss going for their walk. Actually, it was more that Moss dragged Les by the lead. (Les always claimed that Moss got more exercise that way, dragging him along as ballast).
Les’ downfall was grog! He had always been a heavy drinker which started to take its’ toll on his health. Whenever Les had to go back to the coast, I always looked after Moss so we were fairly attached.

Eventually I started to tire of the small town lifestyle ( less than 100 people) and decided to return to Melbourne. I made a firm commitment to Les that should he need to go to hospital or for whatever reason, Moss needed looking after, that I would come back from where-ever I was at the time to do so.

Fate intervened, sadly Les was killed in a freak motor vehicle accident about a year after I had left. I was living in central Victoria and drove up to attend the funeral. My partners parting words were “don’t come back with a dog”, as she knew of my commitment. Moss was so excited to see me when I arrived, jumping up and down, straining at his lead and making that strange muffled noise that is a Staffys’ attempt at a bark! Our future together was sealed from that moment on!

Next morning I packed up as much “dog stuff” as I could find and we set off back to Victoria. For all her protests, my partner, Jenni soon became attached to Moss as well. On my trips away, she would always look after Moss, he had his own blanket and pillow, set up in front of the T.V. Totally spoilt! Moss was also surprisingly passive with small Grandchildren, they would sit on him, pull his ears, try to dress him up. Never a murmur of complaint from that dog. He would just roll on to his back to have his belly scratched. I swear he had a smile on his face.
We had Moss for about seven years. Unfortunately he started with hearing loss, then poor vision, the dog years were catching up with him. Eventually I found a lump in his side, which was increasing in size quickly. The vet confirmed my fears and suggested the best thing was to put Moss down. I’m sure some of you know what this is like. I could not believe that I loved that dog so much. I was a mess.

So to complete my promise to Les, I had him cremated, then made up a small box (of Teak!) to hold his ashes. I then posted Moss back to a friend who undertook the task of putting the box of ashes at Les’ grave site. I included a small plaque inscribed:

Amos (Moss) Back with Les. May they walk forever in sunshine.

And, no. I have never had another dog! 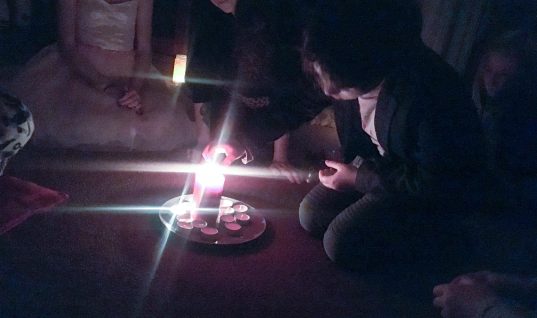 Lost Loved Ones – Remembering them
4 years ago

The Play Meister
4 years ago